Due to the development and foreseen perspectives, Estancias de Patagonia S.A. decided to build its own slaughterhouse and meat process plant.

The Great challenge was under way: the creation of the most modern processiong plant in South America. The first works started on March 2004 with the soil movement. A year later the assembly and construction of the first buildings was performed. The slaughter and processing of meat, that started on November 2007, is carried out entirely in its facilities.

Estancias de Patagonia S.A. starts up a facility dedicated to the slaughtering and elaboration of: cooled and/or frozen carcasses, bone-in cuts, boneless cuts and offal. 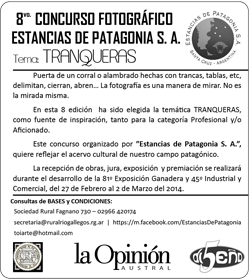